did you know that december 6th is st. nicholas day? it's a holiday that's celebrated mainly in europe. on the evening of december 5th, children put their shoes outside their bedroom doors. in the morning, they wake to find candy, money, and/or little presents inside their once-empty shoes.
i learned about this holiday last year (after december 6th, unfortunately) and thought "what could be a more fun or more simple tradition to start with my own kiddos?" last night, we talked about who st. nicholas was and some of the things he did in his lifetime. the kids picked out the shoes they wanted to use and put them in the hallway. in the morning, they found candy! 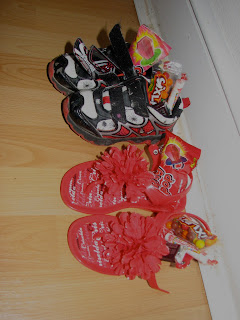 it was pretty last minute, but i thought it would also be a fun thing to celebrate in our 4-year-old preschool class (and it would be a great opportunity to get rid of all the bags of leftover halloween candy we still seem to have in our house). first thing, the kids came to the carpet and i told them about "the first santa claus." i'll tell you what, you say you have a story about santa claus and all the sudden 4 year-olds want to listen!
i found this story on wikipedia to share with the kids:
"In his most famous exploit,[18] a poor man had three daughters but could not afford a proper dowry for them. This meant that they would remain unmarried and probably, in absence of any other possible employment, would have to become prostitutes. Hearing of the poor man's plight, Nicholas decided to help him, but being too modest to help the man in public (or to save the man the humiliation of accepting charity), he went to his house under the cover of night and threw three purses (one for each daughter) filled with gold coins through the window opening into the man's house.
One version has him throwing one purse for three consecutive nights. Another has him throw the purses over a period of three years, each time the night before one of the daughters comes of age. Invariably, the third time the father lies in wait, trying to discover the identity of their benefactor. In one version the father confronts the saint, only to have Saint Nicholas say it is not him he should thank, but God alone. In another version, Nicholas learns of the poor man's plan and drops the third bag down the chimney instead; a variant holds that the daughter had washed her stockings that evening and hung them over the embers to dry, and that the bag of gold fell into the stocking."
(i left out the part about the prostitutes, though. no worries.) 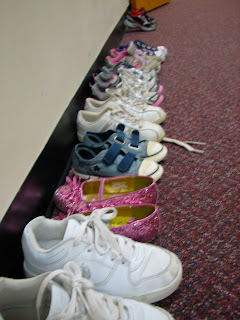 then i told them how if people needed food or money, they would leave their shoes outside their door to let st. nicholas know they were in need. and today this is what children do to celebrate his memory.
so off the shoes went! (and since i have to constantly remind some of them to keep their shoes ON, this was way beyond fun.) and into the hallway they went! 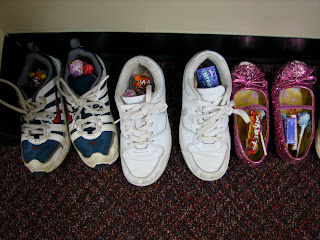 even though i was absent from the room for a good 10 minutes or so, they couldn't believe "it worked" and candy actually appeared in their shoes! one little boy said, "there must have been MAGIC in the hallway!" 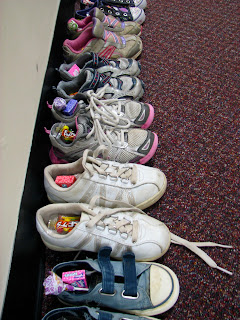 Email ThisBlogThis!Share to TwitterShare to FacebookShare to Pinterest
Labels: traditions