did you know that? apparently there are between 6000 and 7000 different languages in the world today. holy canoly.
i was supposed to introduce this concept to my daughter as we enjoyed the story of the tower of babel together. the lesson encouraged us to build our own tower and talk about different languages and how difficult it would have been to try to work with people you can't understand.
personally, i found this lesson hilarious, since we happen to live in a non-english speaking country where we spend a good deal of our time not understanding people, and we know first hand the frustrations those people would have been facing (and we get why they ended up quitting and moving away from each other).
so instead of talking about how dora speaks spanish and if we can remember any of the words she teaches us, we just spoke in a different language to each other. rachel doesn't usually do this with me (i mean, there's really no need), but whenever she does it's an extremely humbling experience for me. rachel learned more of this language in 9 months of pre-school than i probably will over the course of 5 years. she even corrects me sometimes. needless to say, if there's one thing my little family understands well, it's the concept of a language barrier.
and now some pictures of us playing our newly invented game we dubbed "the wade family pyramid." it's kind of like jenga and the tower of babel had a baby that happened to be a game. enjoy! 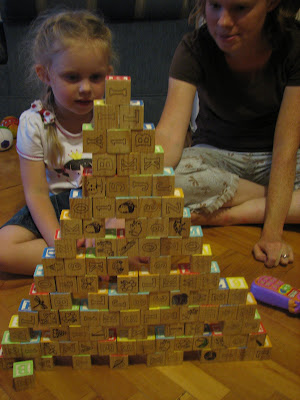 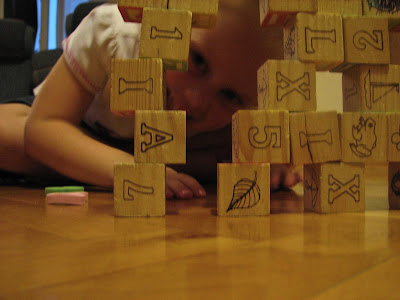 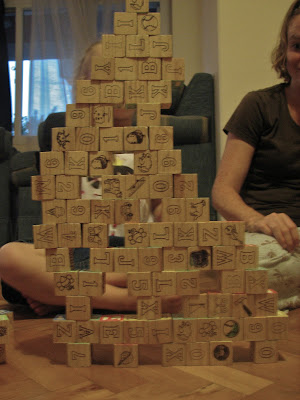 Great post! I'm sure you are speaking Turkish better than spoke Macedonian, Andie!:)But I know what you mean about being humbled by our children. Sawyer had to tell Eric and I the word for "egg" in Macedonian:)
~JIll